Scarborough hospital to shut women and children’s wards at Birchmount

Written by Jim Karygiannis on September 9, 2019. Posted in Clippings 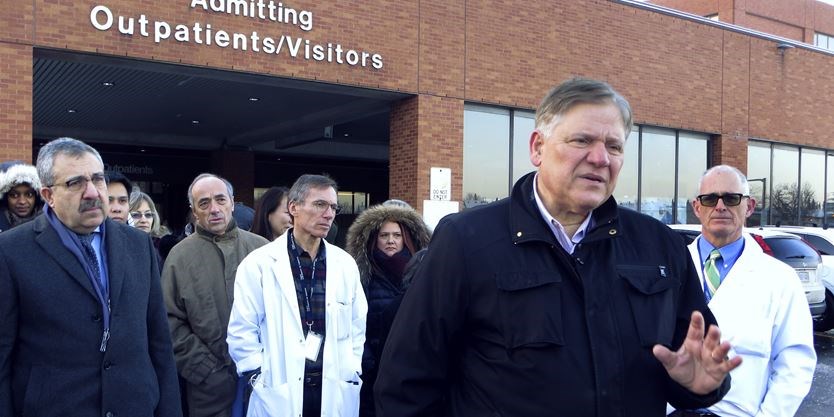 The Scarborough Health Network (SHN) will start shutting down in-house obstetric and pediatric services at its Birchmount campus on Oct. 30, the hospital confirms.

“They will have to find some backbone,” Karygiannis said last week, pledging to “hurt” those MPPs’ chances for re-election if the Birchmount wards aren’t saved.

“In the next (provincial) election, I’m going to go after people, and I don’t care if they’re friends or not.”

The hospital insists Birchmount’s emergency department won’t close, and staff at its other sites, SHN General and Centenary, can safely handle children and pregnant women arriving at Birchmount.

A report released in January made its case concentrating pediatric and obstetric care at General and Centenary will actually improve those services across Scarborough.

“The plans were developed with patient safety and quality of care front and centre,” David Belous, an SHN spokesperson, said in a statement which predicted “a smooth transition.”

North Scarborough ratepayer groups released an Environics Research poll suggesting the issue could hurt federal Conservative candidates running in Scarborough-Agincourt, Scarborough North, Markham Thornhill and Don Valley North, despite their having nothing to do with the decision.

The survey of 961 residents in August found 32 per cent of those who voted for the Ontario PCs last year, and 26 per cent of those “favouring” Andrew Scheer’s federal Tories “would be less likely to support the federal Conservatives if the plan to close local hospital services were to go ahead.”

“We’ve found ourselves with a government that so far hasn’t listened to their own MPPs,” she said.

Moores and other community members brought their Birchmount concerns directly to Ford during the premier’s Ford Fest barbecue in June. “He said he loved Scarborough, he wanted to support the people of Scarborough. We’re hoping he will,” she said.

In a Sept. 5 statement, Babikian said he’s “disheartened” by the hospital’s decision. “During the past eight months, I have spent a great deal of time speaking to stakeholders, including area residents, the hospital administration, front-line staff, the minister of health, her staff, and fellow MPPs,” he said.

“Regrettably, the board and administration dismissed the doctors and community members concerns.”

Ontario Liberals haven’t opposed SHN’s plan, with Soo Wong, Scarborough-Agincourt’s former MP, describing it as a chance to “transform and revitalize some programs and services at Birchmount,” while accusing opponents of spreading “inaccurate information.”

Asked if Elliott supports the consolidation of services, despite opposition from residents and within her own caucus, a spokesperson, Travis Khan, said the ministry “respect hospitals’ responsibility to make independent decisions about their operations, so long as these decisions uphold and protect access to quality care.”

Khan said Elliott wrote to SHN, asking if Birchmount or its emergency department would close, and was told no.

The hospital, Khan said, is “committed to continue engaging with local residents about changes to its women’s and children’s program to ensure any changes are as patient-friendly as possible.”

“It is not acceptable to sit on the sidelines. Health-care professionals have told you that patient safety hangs in the balance,” they said.

“This wouldn’t happen elsewhere in the GTA,” Begum added in an interview.

“All of these (pregnant) mothers are now expected to take long bus rides to another location.”

In March, SHN’s administration was told Birchmount’s surgery department was unanimous in having significant concerns about the closures.

“We feel that the loss of these pillars of clinical services presents potential risks to patients who must be transferred to another facility,” those surgeons said.

Chief of Staff Dr. Dick Zoutman and other SHN administrators have replied to Horwath and Begum, offering to explain the hospital’s “highly detailed” planning in person.

“It does not matter which hospital (campus) a patient arrives at because they will receive the same level of high-quality care regardless of where at SHN they begin their journey,” they said.