Scarborough councillor pushes for speed humps at all schools

Written by Jim Karygiannis on June 5, 2019. Posted in Clippings

Speed humps around Kennedy Public School were installled after 11-year -old student was struck and killed nearby by a vehicle in February 2018. They are some of the first of what Jim Karygiannis, local councillor, says will be 23 Agincourt schools which will receive traffic-calming measures. – Dan Pearce/Torstar

Speed humps around Kennedy Public School were installled after 11-year -old student was struck and killed nearby by a vehicle in February 2018. They are some of the first of what Jim Karygiannis, local councillor, says will be 23 Agincourt schools which will receive traffic-calming measures. – Dan Pearce/Torstar 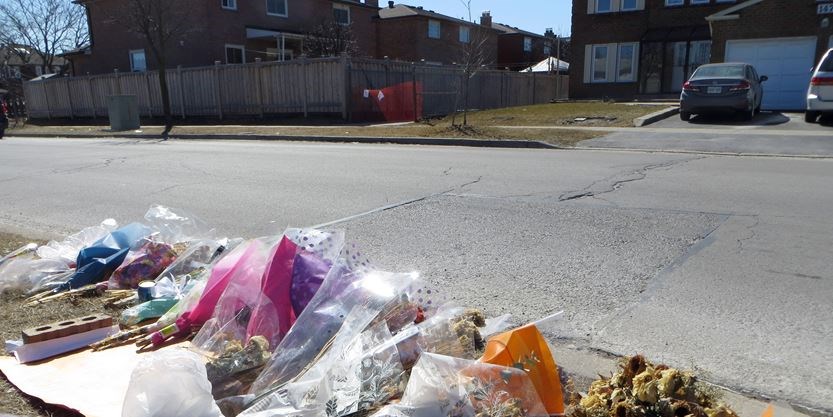 A makeshift memorial on Cannongate Trail for Duncan Xu, a student at nearby Kennedy Public School who was stuck by a car and killed on Feb. 27, 2018. – Torstar file photo

A pedestrian walkway bordered by hedges on either side funnels students toward Vradenburg Drive, while limiting visibility to drivers passing the intersection, across the street from Vrandenburg Junior Public School. The school is one of 23 in Coun. Jim Karygiannis’ ward where the councillor says he is working to have speed humps and other traffic-calming measures to protect children. – Torstar staff photo

Not long ago in Scarborough, the speed hump was considered a thing which didn’t belong.

Putting concrete on a road to slow traffic was rare east of Victoria Park Avenue.

“Good luck to folks who want them downtown,” added Coun. Glenn De Baeremaeker, who, like Holland, isn’t among the new, smaller cohort of Scarborough councillors who took office last year.

A tragedy in the Heathwood neighbourhood, meanwhile, changed minds. And Coun. Jim Karygiannis says it’s set him on a mission to install humps or other traffic-calming measures quickly around every school in his Scarborough ward.

“It’s not just one. Every single one of them,” the Ward 22 (Scarborough-Agincourt) councillor insisted this week.

“I can’t go through another funeral.”

Duncan Xu, 11, was killed crossing Cannongate Trail on Feb. 27, 2018, while walking home from Kennedy Public School. Heathwood residents had requested humps on the street for a decade, fearing such accidents were possible.

They couldn’t convince city officials or Scarborough councillors the humps were needed, and requirements for getting them anyway proved too difficult. The requests were refused.

“Certainly, we failed that community,” he told colleagues as Scarborough community council met on May 22.

A motion at Toronto city council last May made it possible to waive a required poll of residents on traffic calming — usually a tough hurdle, since half of households must vote for a poll to count.

Karygiannis said he’s determined to do the same around more than 20 other schools, and is working with parents, teachers and principals on petitions the city still requires.

Some schools are on major roads which can’t have speed humps, but the councillor said he’ll seek U-turn prohibitions or other measures for those.

According to city staff, Vrandenburg didn’t need humps either. What’s the point of a policy if it’s not followed, asked Thompson, adding people “may take comfort” in speed humps, but he doesn’t.

“In the gap between speed humps, people will speed. People speed over them anyways,” said Thompson, who favours a “more holistic response” to traffic safety including, he said, continuous public education.

The Vrandenburg humps were deferred until June as part of a package of proposals including U-turn prohibitions and a crosswalk to a path facing the school.

Duncan was reportedly struck after emerging from a similar pathway onto Cannongate. A parent, Georgina Foulidis, showed visitors the path is covered by foliage and has no signs warning drivers children cross there.

Representing Vrandenburg’s parent council, Foulidis said most residents support the traffic-calming measures, particularly because cars are cutting through the subdivision and students have no safe place near the school to cross.

“The cars that do come are speeding,” she said.

Rolf Eichfuss, chairperson of the Wishing Well and Area Ratepayers Coalition, however, told councillors the crosswalk is necessary but humps aren’t. “The traffic would focus on the speed bump and not the kids running out of the school,” he predicted.

The Xu family has left Heathwood, but most neighbourhood residents like the humps. They are “lower and milder than what most people originally expected,” said Simon Hai Tian, a parent, so concerns about “potential damage to vehicles or slowing down emergency vehicles went away.”

Coun. Gary Crawford warned last week against “putting speed humps down for the sake” of it. “Very rarely do we put speed humps in, and there are reasons why,” he said.

Coun. Jennifer McKelvie, though, said city parameters for judging traffic calming are outdated. “Moms know best in the school zones right now, and we’re not listening to them in many cases,” she said.