Written by Jim Karygiannis on February 19, 2016. Posted in Community Issues and Events

On Friday, February 19th, we celebrated National Flag Day in our community.

The 51st Anniversary of National Flag Day actually occurred on February 15th – however, as that was Ontario Family Day, it was decided to hold the celebration a few days later.

Held outside, at the L’Amoreaux Community Recreation Centre, more than 100 members of the community attended the first-of-its kind event in Ward 39. The event began a procession of students and community members, who then raised the Canadian Flag, which was followed by the singing of our National Anthem, a cheer for Canada and brief remarks.

My office was pleased to facilitate the event, that was initiated by the Toronto Kaiteur Lions Club.

I want to salute all the staff at the L’Amoreaux Community Recreation Centre and thank them for all their assistance. I also want to thank everyone who came to celebrate our National Flag at this exciting, special community event. 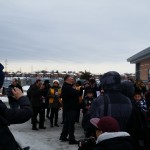 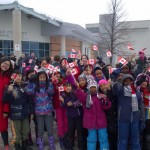 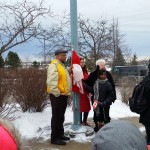