Written by Jim Karygiannis on February 17, 2015. Posted in Clippings, Events 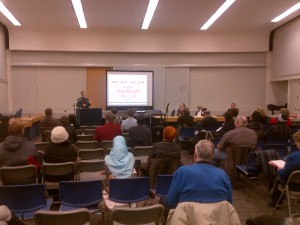 Maybe what haunts us most is our own helplessness.

That was Post-Traumatic Stress Disorder, and today Cole is a “dead man talking” because of it.

“I ended up on Captain Morgan’s boat, and it sailed for a long time,” Cole told an audience, including many people who had suffered from PTSD and trauma, this week in Scarborough.

“I never really drank before I just about killed myself.”

After years of witnessing accidents and violence, Leo Tsang, a commander of Toronto Paramedic Services said he’s lucky not to have PTSD himself.

First responders – police, paramedics, firefighters – are all “fixers” supposed to handle anything that gets thrown at them, Tsang said.

“We can’t be weak,” he told the group at Scarborough Civic Centre.

But first responders are human, and Tsang said they can be seized by self-doubt and depression when they can’t “fix” something.

And apart from a trusted friend in the same profession, there may not be anyone they feel they can talk to. “Who helps us when we don’t fulfill that goal?” said Tsang.

He added his girlfriend, “has never held a baby in her hands that doesn’t have a pulse,” so how can he describe to her what it’s like.

Cole said one trigger of PTSD in members of the military or emergency services is “when these superheroes can’t get the job done,”

It’s a feeling “you can’t do anything; you’re trapped there.” Cole felt that when he flew unarmed into Rwanda during that country’s genocide and a 12-year-old with an AK-47 climbed onto his plane.

During the First Gulf War he flew transports on missions he had difficulty remembering, including one “to an airport that doesn’t exist” with passengers and cargo he wasn’t allowed to see.

Long afterwards, when the buttons were being pushed, Cole couldn’t make them stop. He turned to alcohol, but like others with PTSD, he found he couldn’t escape from himself.

“When you drink enough, you can lose yourself, but you always come back, and there’s nothing else that works,” he said.

“You gotta have someone in your life you trust,” so if you start acting strange, that person can tell you need help, added Cole, who said he resisted that advice for so long, alcohol nearly killed him.

“I told my wife, ‘Don’t you dare call this in.’ I thought I could handle it.” Fortunately, his wife, herself a 30-year veteran of the forces, didn’t listen.

Make the offers of help, he said, “but don’t push it on them,” because they’ll push back. The best thing to do is wait until the sufferers ask, unless you think they’re thinking of suicide.

Traumatic experiences have “assaulted the brain” in some way, and over time lead to lasting changes, said Ash Bender, a psychiatrist at The Scarborough Hospital.

Often, it takes years for the brain to respond to trauma and recover, but Bender said people can recover or lessen symptoms with treatment.

“You need to understand your illness in order to seek treatment, and denial is a powerful thing,” he said, adding the trauma of the Sept. 11, 2001 terrorist attacks generated interest in PTSD caused by situations other than war, and more treatment options are coming.

“It’s never too late to try to get better,” Bender said.

The session, organized by volunteer members of the TSH Community Advisory Council, also heard from a retired police officer who entered a North York house where a mother in 1972 had poisoned her children.

After so many years, it’s the children’s lunch pails, hanging on a peg, which he thinks about most, he said. “I can see those three little lunch pails like it was yesterday.”

Another man explained why he won’t go on a cruise with his wife. He almost drowned in the Arabian Sea at age six, and at 16, a close friend drowned in front of his eyes; he didn’t know how to swim and couldn’t help. “Forty seven years later, sometimes I still get this nightmare,” he said.

A Royal Canadian Legion service officer said she knows Canadian Forces veterans of Afghanistan who are returning to stand on Hwy. 401 overpasses. She tries to get them to go somewhere else, where she can talk to them, she said. “Sometimes they’ll just cry.”

Sidonia Couto, a mental health counsellor, Canadian Centre for Victims of Torture, said most of her clients have some symptoms of trauma when they first come to Canada, especially a lack of trust.

Survivors are resilient, but “in many languages there’s not even a word for trauma,” and families of people who have been traumatized may not want to speak about it, in order to just push things under the rug.” But it doesn’t work that way, she said.